Held virtually on October 22, 2020, Dr. Bettina Aptheker discusses the history of woman suffrage, with particular focus on suffrage history for women of color, as well as ways in which woman suffrage was always intertwined with struggles against racism, white supremacy, lynching, settler colonialism, and anti-immigrant insularity. This history resonates with our present moment as laws restricting voting rights, the wholesale removal of tens of thousands from the voting polls, and punitive sanctions continue to plague what should be the hallmark of our democracy: easy access to voter registration for all citizens, easy access to polling places on election day, freedom from intimidation, freedom from the fraudulent practices of state officials, especially gerrymandering, and freedom from international intrigue to manipulate voters and hack into electronic voting systems.

Dr. Aptheker is Distinguished Professor Emerita, Feminist Studies Department, University of California, Santa Cruz, and holder of the Peggy & Jack Baskin UC Presidential Chair for Feminist Studies. A political activist since the 1960s, she is the author of several books, including Woman’s Legacy: Essays on Race, Sex & Class in American History (1982), The Morning Breaks: The Trial of Angela Davis (1976; 1999) and Intimate Politics: How I Grew Up Red, Fought for Free Speech & Became A Feminist Rebel (2006). She is currently working on the book Queering the History of the Communist Left in the United States. Dr. Aptheker is an alumna of SJSU, having received her Master’s degree in Communication Studies (1974). She was a lecturer in Women’s Studies and Afro-American Studies at SJSU (1976-1979), before entering the History of Consciousness Program at UC Santa Cruz, where she received her doctorate in 1983. 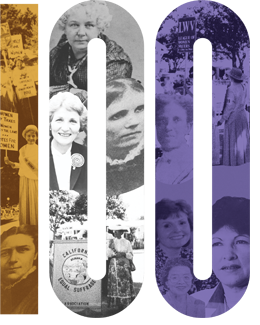 Due to the COVID-19 pandemic, physical materials from this exhibit are unavailable until further notice. Visit our Women's History LibGuide which highlights some of the physical artifacts from the library's Special Collections.

SJSU’s Special Collections and Archives presents an exhibit of archival materials covering the local origins of the women’s suffrage movement, tracing these roots through to the present day. While Silicon Valley is known for its role in leading the technology industry, the South Bay Area also led the way for women in pioneering positions in local government and business. Featuring materials from former mayors Janet Gray Hayes, Dianne McKenna, and Susan Hammer; Kate Kennedy, a member of the first graduating class of the Normal School who became known for campaigning for equal pay for women; city councilwomen Blanca Alvarado and Iola Williams, and many other prominent local women in education, law, and science.

The exhibit also showcases items from SJSU’s Women’s Studies program, local chapters of the National Organization for Women, the Women’s Heritage Museum, the League of Women Voters, and the National Women’s Political Caucus. Women from across the South Bay were actively hosting suffrage events and traveling across the United States to promote the cause, yet despite this, the history of the suffrage movement in San José and environs is much lesser known than the suffrage activities of other areas of the Bay Area like San Francisco and Oakland.