SJSU Special Collections & Archives exist to acquire, preserve, arrange, describe, and make accessible its rich holdings of secondary and primary materials to support the diverse teaching and research needs of undergraduates, graduates, faculty, staff, and the larger community. These collections document local, regional, and California history, with a specific focus on history, politics, literature, and art. In addition, the Department is responsible for documenting the history of the university, and has a large collection of university and faculty publications, administrative records, photographs, and ephemera. 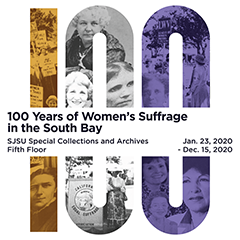 SJSU’s Special Collections and Archives presents an exhibit of archival materials covering the local origins of the women’s suffrage movement, tracing these roots through to the present day. While Silicon Valley is known for its role in leading the technology industry, the South Bay Area also led the way for women in pioneering positions in local government and business. Featuring materials from former mayors Janet Gray Hayes, Dianne McKenna, and Susan Hammer; Kate Kennedy, a member of the first graduating class of the Normal School who became known for campaigning for equal pay for women; city councilwomen Blanca Alvarado and Iola Williams, and many other prominent local women in education, law, and science.

The exhibit also showcases items from SJSU’s Women’s Studies program, local chapters of the National Organization for Women, the Women’s Heritage Museum, the League of Women Voters, and the National Women’s Political Caucus. Women from across the South Bay were actively hosting suffrage events and traveling across the United States to promote the cause, yet despite this, the history of the suffrage movement in San José and environs is much lesser known than the suffrage activities of other areas of the Bay Area like San Francisco and Oakland.