In 1923, during the same year that the institution became the San José State Teachers College, Joyce Backus, who as the third Librarian embarked on a legendary 42-year career that saw tremendous growth in Library collections, services, staff, and facilities, replaced Helen Evans. This was all in tune with the institution’s transformation from a Teachers College to a State College in 1935, now including many other major courses of study besides education.

Library expansion included the construction of a new Library building in 1942 that extended from the 1910 building westward toward Fourth Street, followed by the construction of a Library Annex in 1956, which extended northward toward the old public Carnegie Library (built in 1901) at the corner of Fourth and San Fernando Streets. The Carnegie building had ceased being a public library in 1936, and was sold to the college for use as a Student Union. As the Library required further expansion space, this building was razed to make way for the construction of yet another wing, known as Library North, in 1961.

Following Joyce Backus’ retirement in 1965, the Library continued its role in keeping up with, and supporting the curricula of a college that in the 1970s became a university. Most of the Library collections had since been reclassified to the Library of Congress system, an arrangement that better suited a largely academic collection. At approximately the same time as Backus’ retirement, the Tower and adjoining wings, including the 1910 Library building, were deemed unsafe as potential earthquake hazards and were razed, with a massive public outcry preserving only the present-day Tower and Morris Dailey Auditorium from the wrecking ball. 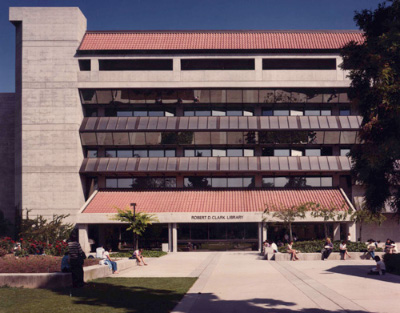 The 1970s also saw the need for the Library to expand to yet another building that was intended originally to hold all of the Library’s collections in one multi-story high rise facility. The economic inflation of the times, coupled with price constraints and budget cuts led to the construction of a scaled-down five-story building that opened in early 1982, and was named after former College President Robert D. Clark.

As this new facility was inadequate to house the entire Library collection (by this time over one million volumes), the collection was split between older publications to remain in the old North Library building, with newer publications (generally post-1970) to be relocated to the new Clark Library. The old Library complex was renamed after another former College President, John T. Wahlquist, with the separate wings known as Wahlquist South, Central, and North. Wahlquist South and Central were refurbished for use by various non-academic campus offices and services.