The SJSU Library Moves Into the Digital Age, 1980–Today 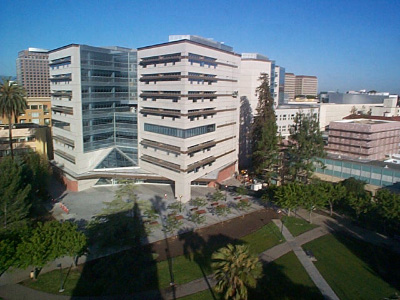 Plans were made in the early 1990s to raze the campus Administration building to allow for an expansion of Clark Library, but this plan was ended as soon as the idea of a shared University / City of San José Public Library, conceived during discussions between former San José Mayor Susan Hammer and former University President Robert L. Caret, was established.

The Wahlquist buildings were demolished in 2000 to make way for construction of the new Dr. Martin Luther King, Jr. Library, which proceeded after a groundbreaking ceremony held on October 20, 2000, exactly 130 years to the day after the cornerstone was laid for the original San José Normal School building at the Washington Square site. It is fitting as we embark on the twenty-first century that the same site occupied at separate times during the twentieth century by both a San José Public Library building and a University Library complex now houses in one facility a unique state-of-the-art Library containing both the main branch of San José Public Library and the San José State University Library. It is in this new Library that both “town and gown” may share together a facility dedicated to lifelong learning for all members of both the public and the University communities, alike.