The Move to San José

The San José State University Library has its beginnings in the early days of the California State Normal School, founded May 2, 1862, in San Francisco. Previously known as Minn’s Evening Normal School, founded in 1857 for the purpose of educating teachers for San Francisco schools, the new state institution began to provide several thousand dollars of funding annually for a nascent library that by early 1864 included 1000 books, mostly textbooks, with the remainder reference works and books of general reading.

After considering a number of neighboring towns, the Normal School Board of Trustees decided to relocate the School to San José in 1870, as San Francisco was thought to be too distracting of an environment for the students, and also auspiciously because library facilities were too small in the San Francisco facility.

In 1872 the first California State Normal School building in San José was completed, and included a separate room for the Library on the first floor. This building was destroyed by fire February 10, 1880, but fortunately, most of the Library’s 2000 volumes were saved.

By May of 1881, a new building was completed, and once again a room was designated for the Library on the first floor. It was at this time that the first full-time Librarian, Ruth Royce, was appointed. Previously, solely student volunteers between classes monitored the Library. During Royce’s 37-year tenure as Librarian, the Library was to experience significant growth in collection size, and in stature.

In 1887, when the name of the institution was changed to the San José State Normal School, the Library contained over 3000 volumes. Unfortunately, the San Francisco earthquake of April 1906 rendered the Normal School building unfit for use, so the Library, as well as all of the classrooms was relocated to temporary facilities, known as “The Shacks.” The third Normal School building, including the present day Tower and a connecting separate wing to the northwest for the Library, was completed in 1910. By this time, the Library had increased to 12,000 volumes. 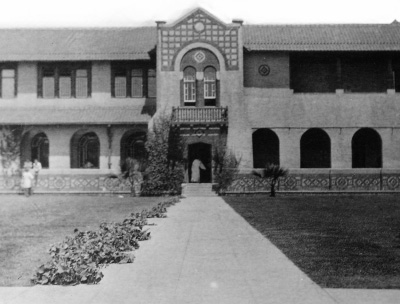 In 1918, Helen Evans became the second Librarian at the Normal School, after having served as an assistant to Ruth Royce. During her five-year tenure, the Library increased to 21,000 works, and Evans was responsible for introducing the Dewey Decimal classification system to the Library. Prior to this, works were arranged generally by subject, and often required the direct assistance of the Librarian or her assistants in order to locate the books on the shelves.